Traditional Ghanaian festivals are woven into the very fiber of Ghana’s culture and society, and have been celebrated for as long as Ghana has been in existence; even when it was the Gold Coast.
Festivals have historical, cultural, moral, political, and economic significance. In a historic sense, they are used to mark tribal milestones which sometimes date back to pre-colonization. Culturally, they ensure that the tribe’s cultural identity and values are strengthened for progeny. Festivals are also occasions for the chief (s) and elders in the traditional areas to speak to the youth on the importance of being upstanding. Additionally, visitors who come from far and near to witness the festivals contribute economically through their purchases. Some festivals are also occasions to raise funds for the community.
Here is our list of 10 traditional Ghanaian festivals you can’t miss this year:

The Ashantis hold Akwasidae festivals every six weeks, to honor the ancestors and the Asantehene, their king. Akwasidae is a ceremony commemorating the date that Okomfo Anokye magically brought the Ashanti Golden Stool, the soul of the Ashantis, down from the sky. The festival takes place at the court of the King’s Palace. Notably, it features a procession of the Asantehene, drummers, dancers, singers who perform in honour of their ancestral spirits.

The Begum festival commemorates the flight of Naiul-Lah Mohammed from Mecca into exile in Medina. Events begin with processions around principal streets and end at nightfall with a at gathering the Chief’s Palace with lighted torches. The ceremony illuminates the streets and there is dancing and drumming into the early hours of the morning.
The Dagbon, Gonja, Mamprusi and Nanumba in the Northern Region celebrate Bugum.

“Aboakyir” means ‘hunting for game’ in the Fante dialect. The people of Winneba in the Central Region celebrate the festival. To begin the festival two warrior groups must catch a live bushbuck from a designated game reserve. They must catch the buck without weapons and without causing harm. During the expedition, the chiefs, and their subjects, dignitaries and tourists wait anxiously at the durbar grounds amidst drumming and singing. The first group to catch a live bushbuck presents it to the chiefs and people at a colorful durbar. The people then sacrifice the bushbuck, which, signifies the start of the Aboakyir festival. During the festival, the people of Winneba pray for a productive harvest and seek spiritual guidance from the gods.

The word “Bakatue” is from the Fante dialect and translates as ‘draining of a lagoon.’ The chiefs and people of Elmina established the festival at least as far back as 1847. They celebrate Bakatue to mark the beginning of the fishing season. They also use the festival to offer thanks and prayers to the gods for a good fishing year. Additionally, the invoke the deity, Nana Benya’s continuous protection of the state and the people. A royal procession leading to the chief’s palace amidst traditional music ends the festival

The Asafotufiam Festival is celebrated by the chiefs and peoples of Ada in the Greater Accra Region. It commemorates the victories of ancestral warriors and also those warriors who fell on the battlefield. The celebration reaches its climax in a colorful procession of chiefs in palanquins. The chiefs are accompanied by traditional military groups called amidst drumming, singing, and dancing through the streets. At the durbar, the chiefs exchange greetings and pour libation.

The chiefs and peoples of Nalerigu, Tamale, and Wa in the Northern and Upper West Region celebrate the Damba festival. The festival is an occasion for feasting, exchanging gifts, shooting of muskets, display of warrior dances, and celebration of chieftaincy. Throughout the festival, the local people troop into the festival grounds and palaces. The people then shower praises, entertain, show love, and show off their finery. They also listen to oral history as praise singers sing to the paramount chiefs or king and subjects.

The Ga people of the Greater Accra Region of Ghana celebrate the Homowo festival. They celebrate Homowo to commemorate the period in Ga history when there was a severe famine. The Ga people, rather than wallow in self-pity, began earnestly planting food and were rewarded with a bountiful harvest. Therefore, the celebration of Homowo is an occasion to hoot at hunger and to rejoice in a harvest. The festival shows the people that with hard work and determination, they can succeed in everything they do just as their ancestors did.
The festival is also an occasion to resolve disputes and for the King to advise his subjects to do what is right and to live in harmony.

Afenorto means “Period of Rest at Home.” The Chiefs and people of Mepe celebrate the Afenorto festival in August to renew the sense of oneness of the people.
The festival provides a unique opportunity for reunions, particularly bonding with extended family far and near as well as the ancestors.

The Anlo Ewes are an ethnic group in the Volta Region. When they first migrated from Southern Sudan, they settled in Notsie in Togo under a tyrannical ruler called Ago Koli. Fed up with living in fear under Ago Koli, the Anlo Ewe escaped from Notsie by walking backward. They did so in order to confuse their would-be captors, as their footprints would point towards, and not away from, Notsie. In order to commemorate the bravery of their ancestors, the Anlo Ewes celebrate Hogbetsotso, the Festival of the Exodus. An essential aspect of the festival is a durbar during which the chiefs dress in colorful regalia and sit in state to receive homage from their subjects. The main durbar always takes place on the first Saturday of November in Anloga, in the Volta Region.

Which festivals are you planning on attending this year? Let us know in the comments! 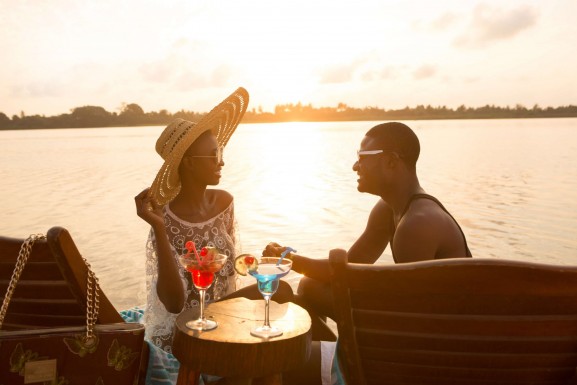 How to Save Money during Honeymoon in Ghana

Ghana is located on the West coast of Africa. It is one of the beautiful cities with astonishing green landscapes,

In just a few short years, the Ghana Paragliding Festival has become an integral part of the annual Easter celebrations

If you are having any questions, please feel free to ask.

Drop Us a Line